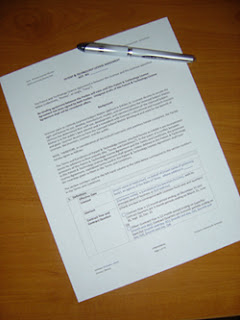 By Keith McDowell
In an unheralded and mostly unreported event in the spring of 2010, a team of technology transfer licensing experts from across the wide spectrum of institutions of higher education in The University of Texas System including small, mostly undergraduate universities, the flagship University of Texas at Austin, five health science centers, and the M. D. Anderson Cancer Center achieved a success that many thought was impossible or, at least, extremely difficult to do. They created two patent licensing agreement templates suitable for most deal structures – one for the physical sciences and one for the life sciences.
The history of such attempts likely goes back many years and even centuries. The story of Hans Lipperhey and his failure to obtain a patent for the telescope in the early seventeenth century from the Netherlands and the subsequent production of telescopes certainly reveals that technology transfer management has been around for a long time. One wonders what old Hans would have said about his failure and the process had he been interviewed by a reporter?
Many, including the author, view the deal-making process as situational management where one listens to the “customer” or potential licensee and pulls from the shelf a deal structure in the form of an agreement template that best meets the particular “sweet spot” for that deal. Unfortunately, the shelf is filled with many such “sweet spots,” although only a few dominate most of the action.
In some measure the concept of many sweet spots and situational management condensed into the modality known as the “menu” or “drop-in phrase and clause” agreement template, driven principally by the advent of advanced information technology computer or web forms and the ability to click one’s way to the desired deal structure and licensing agreement in language pre-approved by the legal office. The best-known computer programming effort in this regard is TurboNegotiator. Its’ usage is supported by the University-Industry Demonstration Project.
In Texas, the story over the past decade unfolded in a somewhat different manner. Some people in leadership roles, including those at the Texas Emerging Technology Fund – a State agency that invests in startup companies associated with universities, came to believe that the speed of deal-making was the critical factor and that speed could only be obtained by a fixed deal structure and a one-size-fits-all license agreement. Although such fixed agreements have their place and sometimes achieve their putative goal (see, for example, the Carolina Express License), university technology transfer managers in Texas balked at the idea of a statewide one-size-fits-all agreement.
Recognizing that even the multitude of “sweet spot” templates required some negotiation – hence the appellation “template,” the question was raised in 2008 as to whether a single “template” could be constructed as a reasonable step toward satisfying the demand for a “one-size-fits-all” agreement, whether enhanced speed of deal-making was achieved or not. Most answered that question in the negative, including the author. But a team was formed in the spring of 2009 to make the attempt. I’m happy to say that I was proven wrong.
Immediately, the team recognized that there truly were two classes of deal structures: those associated with intellectual property from the physical sciences and those associated with intellectual property from the life sciences. But amazingly over time, a consensus emerged that it was indeed possible to create a separate template for each of the two classes. In a tour-de-force effort by the team that consumed the better part of a year and involved discussions with many experts in Texas outside The University of Texas System, such templates were created and were announced in the spring of 2010.
Conceptually sound, balanced, and readable, these templates are a testament to both the genius and the hard work of the team members. Two versions of each template were created: one in a traditional agreement format and a second in a two-part format in which the business terms that change from deal-to-deal are included in a cover document and the standard legal/operational matters are isolated in Exhibit A (Terms and Conditions). For the benefit of the general technology transfer community and given that their existence is not widely known, I have posted copies of these templates for download and use by the general community as follows:
Life Sciences: traditional format [word version or pdf version]
Life Sciences: two-part format [word version or pdf version]
Physical Sciences: traditional format [word version or pdf version]
Physical Sciences: two-part format [word version or pdf version]
My hat goes off to the members of the team. They demonstrated that universities are able to take on difficult technology transfer issues and achieve success. Despite claims to the contrary, technology transfer and the broader arena of the commercialization of university research are transforming themselves at universities to meet the needs and demands of the twenty-first century. The search for the elusive universal licensing agreement format and the improvement in deal-making will continue at universities, but for now, we celebrate a major step forward along that path.
Posted by Keith McDowell at 11:49 AM