These Boots Were Made For Walkin' 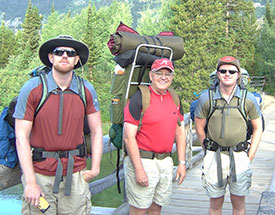 Or maybe not! Much to my chagrin, my favorite well-broken-in hiking boots separated the sole from the upper boot near the heel during a three-mile walk this past Sunday.   And it happened on both boots at nearly the same moment. So much for glue versus stitching!

With all due respect to Nancy Sinatra and her hit tune of 1966, hiking boots have always been the bane of mountaineers or even those people who enjoy simple hikes. Whether it’s blisters, sore feet, black toe, jammed toes, or numbed nerve endings, boots have a way of bringing a halt to the heartiest of souls. I should know. After over 500 backpacks and summit attempts spanning some forty-five years, I’ve experienced it all.

I especially remember a moment back in the early 1970s when I realized that I had lost the feeling in my right foot when I touched it following a long week of hiking using my old-fashioned, leather winter boots – years of melting silicon “bear” grease into the leather had made them heavy beyond belief. I couldn’t afford the fancier double-lined boots of that era. I visited with a medical friend who was also a mountain climber and he told me: “Don’t worry. Do nothing. Your nerve endings will spring back into life one day.” Yeah, right! But he was correct. A year or so later, I woke up one morning with my foot on fire. Feeling had returned.

So, it is with regret that I toss a reasonably comfortable pair of boots into the trash bin and contemplate my next move. Should I purchase some inexpensive, soft, and light-weight hiking boots with cleated soles or go for the much more expensive, hard, and heavy mountaineering boots? And how about glued-on soles versus stitch? Of course, I could shoot the moon and go for the best of the best – a pair of Peter Limmer boots.

But time is of the essence and I need to get a new pair broken in. You see, at 69 years old, I’m headed for Colorado in July to join my son, my nephew, and my brother to climb Pikes Peak and a few other 14’ers. My brother has never climbed a mountain so this should be an interesting adventure.

Boots aside for the moment, the world of mountaineering and the gear used by mountaineers have changed significantly over the past fifty years. Innovations abound in just about every aspect of the sport – hmm, is mountaineering a sport or an extreme activity?

Take, for example, the use of electricity. We’ve gone from batteries used to power headlamps and radios to solar panels, whether the hard foldup variety or the flexible ones. What can I say? It’s essential that we power-up those laptops and connect to social media while chilling out in our tents in the Colorado back-country or the base camp on Mt. Everest. And for the truly bleeding edge – I’m not talking about the blisters on your foot, how about a flexible computer display that rolls up? Oh, and don’t forget to take along your favorite GPS device. It’s important to know your exact coordinates in case you get lost.

My old ripstop nylon tents with aluminum poles that are guaranteed to attract nearby lightning have been replaced with Sierra Designs free standing, ultralight tents featuring ExoFusion technology and DAC Featherlite® NSL poles. And my tent pegs that must be pounded into the ground with your boot – tough to do when there is only rock or snow around – have been replaced by a Jake's Feet™ corner anchor system. Shucks! If only I could afford all this new technology.

Fellow hikers whisper and point at me these days when I travel into the back-country with my old Kelty external frame pack from the 1960s as shown in the photo at the beginning taken in 2005 with my sons prior to a hike to the west side of the Grand Teton. I think it was called a BB4 pack and was one of the last of the so-called “green packs.” My sons as well as Kelty have moved on to the modern contoured frame systems that claim to provide enhanced stability. In my day, it was all about getting all the weight over your center of gravity. These days, I’m happy just to get my center of gravity moving. I think I’ll pass on this one since my backpacking adventures are just about over and the BB4 still works for me.

Speaking of packs, there is no end to the choice of day packs. Many people including my youngest son prefer to accessorize with a hydration bladder in order to drink fluid at any time during the hike through a tube hanging next to the mouth. Stopping to rest is optional. My daypack is an Alpine Designs pack purchased in the late 1960s. It’s been my constant companion ever since and is part of my ritual.

I particularly recall a day in 2002 while hiking back down the “road” from the microwave towers on Mt. Princeton after a training hike when I passed some folks going up. They purposely stopped me to “admire” the museum piece on my back and couldn’t believe that one was still in service or that the leather bottom and leather straps had not long since decayed.  Such is life when one is old and a cheapskate.

And then we have the clothing. Personally, I still like my old corduroy knickers and my navy blue Peter Storm wool sweater imported from England. I look just like a Swiss guide in that outfit. But wait, knickers no longer stop just below the knee. They’ve become convertible pants and a host of other marketing slogans. And Peter Storm sweaters – they’ve been replaced by fleece jackets, vests, anoraks, shirts and pants. I have to admit that I like my North Face fleece jacket, but I’ve always wondered whether fleece actually describes the nature of the material of which it is made or the effect on my pocketbook.

I still remember when Gore-Tex became the replacement for wool in the late 1970s. Now-a-days you can find all kinds of brand names and fabrics that claim active stretch fits to one’s body, anti-wicking, sun protection, and even sweat-activated. I have several different varieties and they do keep me warm and dry on 14’ers. All and all, the innovations in clothing and fabrics have been a real plus for mountain hiking.

Oxygen remains a serious issue on 8,000-meter peaks with POISK oxygen cylinders manufactured in St. Petersburg, Russia still the standard. One would think that innovators could come up with something new, but no such luck so far. But then entrepreneurs have perfected the concept of oxygen bars where one can go to get a snort and hang out with like-minded folks. My brother suggested we take an Oxygen Plus Elevate Pack along with us this summer. You get over 50 flavored breaths per “tank” for a mere $35.99 including system and three “tanks.” And it only weighs one-half pound! I’ll keep his suggestion in mind when I’m panting like a dog at 14,000 feet on Pikes Peak.

Innovation remains important for mountaineering as more and more people take up the sport. I have an extreme suggestion. Let’s invent a bio-nanostructured suit similar to the one on the TV show Continuum that is flexible, covers the entire body, and has a function not unlike body armor or powered exoskeleton suits. The skin could absorb light and convert it into electrons similar to photosynthesis. The electrons could flow through a fractal-like network that self-assembles into a complex circuit that moves the electrons to nanostructures that produce heat on the interior side when the temperature drops, but shut down when too hot, thereby regulating the person’s perceived warmth and avoiding frostbite. The extra electrons could flow to a collection point that recharges batteries used to provide power to all electronic systems including a heads-up display on one’s goggles showing oxygen supply and other vital body and systems parameters. The suit would come with all kinds of built-in communication systems. I’ll leave it to the reader to supply additional functionality. Trust me! Such a suit will eventually be created and marketed.

But then, as always, we must return to the issue of my feet and the procurement of a satisfactory pair of hiking boots. Let’s hope my choice doesn’t “walk all over me.”