Expect the Unexpected in 2012! 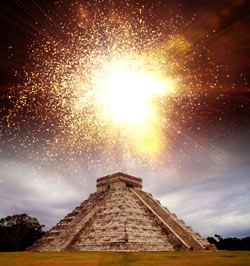 By Keith McDowell
Tired of watching football bowl games? How about all those missed field goals? And for sure, we all wait with unchallenged anticipation for the replay of Alabama versus LSU for the BCS National Championship. Hey, I once worked for Alabama. Roll Tide!
And if watching bowl games is not enough to sate your desire to perform absolutely nothing of value during the holidays, there is always the annual pastime of making resolutions for the new year while prognosticating on how great the year will be … or not. Of course, for those with an addiction to politics as a contact sport, this year will provide the best fix of all. We get to watch an extended replay of the game between the Grand Old Party versus the Democrats … or is it Obama versus Congress?
Certainly Obama scored the first touchdown of the year by a recess appointment of Richard Cordray as Director of the Consumer Financial Protection Agency with Congress supposedly in recess, but actually not. Hmm, is it possible the game clock hit 00.00 too soon? I can hardly wait to hear the verdict from the replay booth after the Republicans challenge the call on the field. Analysts in the MSNBC and Fox News booths are already busy showing the scoring play from every angle.
What about the most important game of all? For those not paying attention to world events, that would be the game of global competition and the American strategy of out-innovating. Is the strategy working? Or are we watching the game clock and warming up our field goal kicker? And, of course, with nothing better to do as we endure the halftime and wait for the second half to begin, it’s important that we perform the necessary and obligatory act of announcing a list of desirable American innovation resolutions for the new year and of making our predictions as to what one might expect for the year.
Recognizing that the innovation ecosystem is coupled to other systems such as the economy, government, and the policies and law of the land, here is my list of American innovation resolutions for 2012. America should resolve to:
And not to be outdone by others and to complete the obligatory resolution-prediction exercise before the next kickoff, here are my predictions for 2012:
Yikes! And all I wanted for Christmas was a touchscreen, voice-activated, iPadish-style laptop including keyboard with free wireless and superspeed connectivity to the Internet. Some of us still use computers for something other than a source for content! So Apple, when do I get my wish?
Mayan predictions aside and Nostradamus notwithstanding, the year 2012 should be a most interesting year with many countervailing forces coming into alignment. I’m certain of one thing. Expect the unexpected!
Posted by Keith McDowell at 7:35 AM