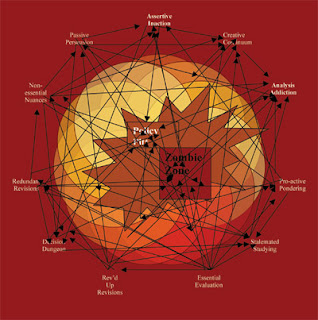 Zap! You have just been zinged by the Zombie Drug and sent to The Zone. No, I’m not talking about the ephemeral “zone” attained by trained athletes during intense competition, or the “zoned out” condition of Zonker Harris and friends in the world of Doonesbury, or the zagging of steroid-enhanced superstars attempting to avoid the next tackler or the next drug test. I’m talking about the ultimate football experience: the north end zone at Bryan-Denny Stadium, home of Alabama football.

The Zone, as it’s called, is a spectacular facility and edifice to the Alabama football fans, replete with numerous amenities guaranteed to convince you that an end zone box seat really is the best way to watch a game. Personally, I prefer the President’s Box on the 50-yard line, but not everyone gets a chance at that view of the Iron Bowl.

But for me, The Zone will not be remembered for its contribution to the football gods, but for something entirely different: the art and practice of decision making.

The story begins on a nondescript day when I left a reception at The Zone and returned to meet with members of my staff in the Office of Research to discuss the usual droll topics of the day. When quizzed yet again by them as to why certain decisions by a fellow administrator had not been made and why I was negligent in not pushing hard for their resolution as was my usual style, I had a moment of inspiration and true innovation. I blurted out: “They’ve gone to the Zombie Zone!”

Amidst tittering laughter and a general rolling of the eyes, I was quizzed yet again as to what the heck was the Zombie Zone. Making it up as I went along, I replied, “you know, the place where decisions are neither alive nor dead.” Sensing that I wasn’t going to be responsive in a practical manner, the staff groaned in disbelief and accepted the adjournment of the meeting.

But adjournment didn’t mean the end of the story – not with my ever intrepid and creative staff. For countless hours over lunch and in furtive meetings, they toiled away to add flesh and bone to the Zombie Zone. And the final product was the graphic displayed at the beginning of the article.

Glowing red, orange, and yellow to reflect the flames of McDowell’s Inferno, the pathways to the Policy Pit and the Zombie Zone of Decision Hell were entered through the following trap doors:

And, of course, all the pathways leading to the Zombie Zone pointed inward with none leading out. Given more time and innovative energy, I’m sure the Alabama Office of Research could have created the ultimate theory of decision-making. And here you thought football – namely, The Zone – had nothing to do with academics or innovation!

Over time, the Zombie Zone became a great source of amusement as research office staffers routinely whispered and secretly referred to “the zone,” often producing many strange and puzzled looks by those not in the know who wondered why The Zone had anything to do with the topic at hand.

Humor aside, the act of decision-making is all important to every facet of our lives, but especially to those facets that concern starting up or investing in a new company, or trying a new experiment, or becoming an entrepreneur, or making that intuitive leap to a new innovation. It’s so easy to arrive at “decision junction” only to pick one of the trap doors leading to the Zombie Zone or Policy Pit.

No matter how hard we try, there will never be the perfect process, enough time, or the complete set of facts and data required to always achieve the perfect decision. Failure to decide is also a choice and often the wrong one. And like the infamous “writer’s block,” it can lead to stagnation. For myself, I prefer making the decision to move from A to B and then adapting by mid-course corrections as new information emerges. Making the wrong decision is not something to be feared or a certain path to the other Hell. It’s a part of doing business.

Decision, decisions! Who needs them? We all do. And as the football addicts among us await the start of a new season in late August and the inevitable crowning of the Crimson Tide as the national champions, take a few minutes to step free of the Zombie Zone with its entrapments and re-enter the real world where business decisions must be made in a timely manner free of false encumbrances and useless agonizing. And when you’re done, take a deep breath and shout with the rest of us: Roll Tide!
Posted by Keith McDowell at 5:30 PM