The Bizarre World of Global Competition 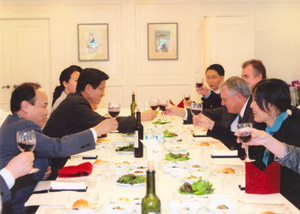 Don’t stare! Don’t gesture! Those were the terse warnings given to my son John and me on the morning of 27 September 2008 by our U.S. military escorts as we stood in line in the Joint Security Area next to Panmunjom waiting to cross over to the sky blue cinder block building that houses the meeting facilities for negotiations between North and South Korea since the 1953 armistice. Sitting astride the border between the two Koreas, the small, one-room building is dwarfed by the opposing ornate embassy buildings, each an expensive symbol of the never-ending competition to be the most imposing and impressive – or, figuratively speaking for the vulgar among us, flipping the biggest state-sponsored bird to each other.

As our party quietly descended some massive steps and walked toward the cinder building, specially trained Republic of Korea troops stood rock hard ready to respond to any incident. On embassy balconies across the border, North Korean soldiers dressed in greenish-brown uniforms with red trim glared and scowled down at us, further heightening our anxiety as we entered the building.

The meeting room itself was plain and dated – nothing special, but history filled the air as we surrounded the rectangular table used for negotiations. My son and I both made the step over the line on the floor in the middle of the room into North Korea. Later that morning, we viewed Kijong-dong or “Peace Village,” an unoccupied propaganda city, from an observation post and later tramped bent over through the famous “third tunnel of aggression,” a tunnel dug by North Korea to move troops into South Korea.

Any visit to the Korean Demilitarized Zone is a sobering experience and mine was not any different. How ridiculous is it that such silly games are still being played by world powers after nearly sixty years? It is a monument to the stupidity of humankind!  But such is the stark reality of contrasting cultures and existence in the 21st century as creativity, innovation, and advanced technological societies coexist on Planet Earth with brutal dictators, terrorists, and religious fanatics. Like a Bizarro cartoon, it’s the modern version of the Dark Ages.

And especially poignant for me was the sharp contrast between my day visiting the darker side of humanity and the preceding weeklong tour of the technological advances and capabilities of the Gyeonggi Province of South Korea. As the invited international speaker and a guest at the tenth anniversary of the Gyeonggi TechnoPark as well as a representative of The University of Texas System, I was invited by Kim Moon-Soo, Governor of the province, to a formal lunch with him and his leadership team at the Governor’s Mansion on 24 September 2008.

Governor Kim gets it! Under his leadership, Gyeonggi Province is rapidly jumping over the industrial age and heading into the knowledge and high technology economy of the 21st century. The regional innovation ecosystem he is creating is truly impressive and includes a contract with The University of Texas in Austin to develop technology commercialization. During our meal and on the following day at the celebration, Governor Kim grilled me on how innovation is done in Texas, especially the role of universities. He wanted to know what I saw in South Korea. What were my impressions? He made sure that I visited every nook and cranny of the province.

For anyone who doesn’t believe the world is racing forward and likely to pass America, visit with Governor Kim or the Gyeonggi Province. See the incredible facilities and the dedicated innovators at the many universities and the TechnoPark. See the transformation from ox carts and plows to mountains being moved, truckload by truckload, to reclaim more land from the sea for industrial development. Tom Friedman is right. America must be on notice. As anyone with a passport knows, the world is no longer sitting still. Globalization is real.

But so are the contrasts and so are the demands of human beings. As China is now discovering with the inevitable slowdown in its economy, you can’t create a needed middle class of consumers without the requisite price tag in government reform and change that goes with it. That ultimately means a proper work experience, a clean and healthy environment, and all the other perquisites of advanced society. America should not fear China or the other emerging nations such as South Korea. They will eventually pay the piper as America has done and continues to do. Instead, we should simply do what we do best and innovate.

And that means and requires investment in America. That lesson was brought home to my son and me in the strongest possible manner as we landed at LAX. Picking up our checked bags at a dirty and dingy facility, we were forced to hike through a poorly contrived construction area, exit the security area, find our way to the next terminal, recheck our bags, and re-enter security before boarding a flight to Houston. Tired and weary from our long flight, these misadventures after the beauty of the Seoul and Narita airports told the tale. Yes, LAX was being upgraded and the Houston and Austin airports were a positive experience, but the negative memory of that LAX experience still lingers as a harbinger of things to come.
Posted by Keith McDowell at 12:39 PM