His Name Was Peter 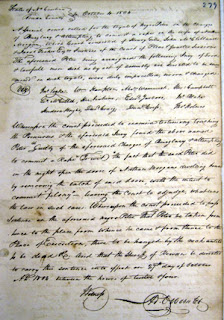 Some of us gently lift the accelerator pedal upon spotting a state highway patrol car hoping against hope that getting clocked at 76 mph with a radar gun in the new Texas 75-mph speed zones won’t get us pulled over. Others are oblivious and zip past with the pedal to the medal blazing along at over 80 mph. For them, speeding is perceived as a trivial offense against the rules of society – justified as their right against intrusion by government or, more often, as simply an in-your-face and arrogant behavior on their part.

Yet such episodes with law enforcement reflect both advances and innovations in technology including the radar gun and the dashboard radar detector as well as changes in culture and attitudes. Some would argue – and rightly so in my opinion – that little has changed on the cultural side of law enforcement and the criminal justice system. One of my most revered ancestors, Nathan Morgan, proves the case.

A soldier in the Revolutionary War and one of the founders of Morgan Township in Rowan County, North Carolina, Nathan was a plaintiff in a case brought before the Pleas and Quarter Sessions Court of Rowan County on 11 October 1804. According to a court document:

A special court called for the trial of negro Peter on the charges of burglary & attempting to commit a rape on the wife of Nathan Morgan …
Whereupon the court proceeded to examine testimony touching the Premises & the aforesaid Jury found the above named Peter Guilty of the aforesaid charges of burglary & attempting to commit a rape. To wit “the fact that the said Peter did in the night open the door of Nathan Morgan’s dwelling house by removing the latch of said door, with the intent to commit felony” – leaving the Court to adjudge, what was the law in such cases. Whereupon the court proceeded to pass sentence on the aforesaid negro Peter. That Peter be taken from hence to the place from whence he came & from thence to the place of execution, there to be hanged by the neck until he be dead. And that the Sheriff of Rowan be directed to carry this sentence into effect on 27th day of October A.D. 1804 between the hours of twelve & four.

Was Peter truly guilty of a crime as alleged or was this just part of the cultural imperative of the “Old South” where slaves were automatically found guilty? And has anything changed given that our modern prisons are filled with minorities and the poor according to the demographics?

We’ve even made a sport out of ranking the worst prison innovations including casting an online ballot for one of the following: the abolishment of weekend lunches in Texas, gouging families by charging a $25 visitation fee in Arizona, and using robo-guards to protect prisoner well-being in South Korea. In Texas, the prison “bid’ness” and Texas Tough is the order of the day. And the Texas prison system costs lots of money, over $3 billion in 2012 or $21,390 annual cost per inmate.

And what about technological innovations in our law enforcement and overall criminal justice system, notwithstanding radar guns and dashboard detectors? Surprisingly, a search on the Internet leaves one with the impression that the “detection and capture” front end to law enforcement is doing well along with our prison systems, but the courts and related judicial systems are merely creeping along.

At the front end, we have drones flying overhead and surveillance cameras in public areas raising the specter of a police state for many; data mining of our phone calls, emails, tweets, and texts by both businesses for commercial reasons and government under the auspices of the Patriot Act; and “hot-spotting” of criminal activity, to name a few.  It’s all part of a “smarter planet” according to IBM – tongue in cheek, of course.

At the back end in our prisons, we have an amazing array of new innovations. The Weapons and Non-Permitted Devices Detector (WANDD) is a “scanner that makes it easier to detect hidden makeshift weapons that violent inmates often fashion.” Note the culturally pejorative use of the adjective “violent” in the quote. For those who worry about “what a crazy criminal might do with” a needle, we have PharmaJet, a needle-free injection system for “medicating and immunizing sick inmates.” Wow! Those folks who created PharmJet must have really enjoyed the movie Demolition Man.

Cellphones cut both ways in a prison, but Wolfhound when “hidden beneath floors and inside walls” can detect calls and texts making it easy to confiscate such contraband. And then there are biometrics to control all kinds of access using eyes, fingerprints, fingernails and just about every other part of the human body. RFID tags including ones injected into a prisoner’s body permit instant access to the location of the tagged prisoner. And let’s not forget the Taser X12 which is “less lethal than a shotgun” and great for bringing crazy criminals and violent inmates under control without killing them.

You gotta luv it! Who would have guessed that such cultural and technological hype would surround the marketing of new innovations for prisons. By comparison, innovations in our courts and judicial system pale by comparison, but exist they do.

Other than the use of computers and information technology, court TV, ankle monitors and the like, the Center for Court Innovation is one example of an organization attempting to innovate and thereby improve the system. The business world is also on the scene, but their menu lacks panache and appears as a list of standard data and process management wonkdom.

For the legal scholars among us, one can debate the constitutionality of all these cultural and technological changes and innovations in our law enforcement and overall criminal justice system and whether they truly represent an advance in civilization, but one thing is certain: they will continue and people will make money and create jobs from them. We cannot forget this sector as we pursue the goal of innovation.

But for me, I come back to “negro Peter” and wonder what he might have thought about all this had he been given the opportunity. In the end, it’s all about people and their lives, not gadgets and parlor tricks.
Posted by Keith McDowell at 3:35 PM