Another Day, Another Time 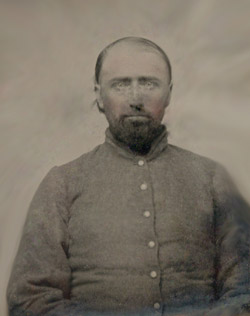 Private Miles P. Morgan of Company G of the Fifth North Carolina Infantry turned right from the Mummasburg Road and entered Forney’s field of fresh Timothy grass in perfect step with his fellow soldiers. From the neighboring hillside, the oblique movement of Iverson’s Brigade presented quite a spectacle to the Southern sharpshooters as nearly 1,400 men from the brigade’s four regiments marched in perfect alignment in sixteen columns, four columns to each regiment with each regiment led by its color bearers. On any other day, the precision of their movement would have brought forth cheers from the onlookers. But it wasn’t just any other day. It was July 1, 1863, and Iverson’s Brigade was marching south toward Gettysburg and battle.

As Private Morgan entered the field, he felt fit as a fiddle after spending several days encamped at Carlisle, Pennsylvania, enjoying plenty of rest and a variety of nourishing meals. The previous day’s march to Heidlersberg had been merely a warm-up for his muscular, but wiry frame. That morning in the pre-dawn hours, a brief rain shower had cooled the air and made for a pleasant morning march toward Gettysburg.

Arriving at Oak Hill approximately a mile north of Gettysburg at noon, the regiment had waited for several hours, as was the fate of soldiers, while the temperature rose into the high eighties and the air turned sultry. The orders to march south were a welcome relief to Miles and his companions as they had grown tied of doing nothing and were happy to be on the move again, even into battle.

As the clock ticked past 3 P.M., Miles Morgan reveled in the smell of the Timothy grass, admired the quality of the farmland under his feet, slightly shifted the musket on his right shoulder, and marched forward with an inborn feeling of pride in his regiment and his fellow soldiers. Suddenly, an entire brigade of Yankees rose in unison from behind a stone wall on the eastern and southern boundaries of Forney’s field and poured a thunderous fusillade into Iverson’s Brigade. It took less than a second for over a thousand Minié balls to strike the marching columns. Private Miles P. Morgan died instantly. In the ensuing hour of combat on the killing field, over 800 Confederates were either killed, wounded, or listed as missing in action. Following the battle, a soldier from an artillery unit reported seeing nearly seventy North Carolinians lying dead and dressed in a perfect row where they had fallen.

A yeoman farmer from Rowan County, North Carolina, Miles P. Morgan was the grandson of Nathan Morgan, a Revolutionary War soldier who twice fought against Lord Cornwallis as a member of the North Carolina militia. In 1858, Miles married Camilla Stoner, a granddaughter of Michael Stoner and a soldier who fought for three years in the German Regiment of the Continental Army before moving to Rowan County. By any measure, Miles and his extended family were American patriots who helped to create the United States of America. So what forces caused him to march to his death on that July day in a futile attempt to sustain the Confederate States of America and to leave behind a widow and a two-year old son, my great grandfather?

The story of Private Miles P. Morgan and his death was repeated over 600,000 times in families from both the old South and the old North as the American Civil War consumed the male population with brutal savagery and cold efficiency. And forgotten by many, it was a war in which technology and innovations outpaced tactics and the strategies employed for centuries in the wars of Europe. With a range of several hundred yards, the newly invented rifled musket in combination with the Minié ball provided defenders an ability to kill and maim long before an attacking formation of massed soldiers could overrun fortifications, even given the time it took to reload the musket with a ramrod. And a Minié ball could penetrate as many as three bodies before being spent. Bones were shattered and split when hit by a Minié ball leading to amputation as the only viable treatment that could save a life from the ravages of infection.

But it wasn’t just weaponry that affected the outcome of the Civil War. It was the rapid growth of the network of railroad lines, especially in the North, to move and supply troops. It was the invention of the telegraph and the ability to sent messages over long distances quickly. And it was the leading edge of the industrial revolution, manufacturing, and the modern factory worker – all centered and located in the North.

The Civil War was the apotheosis of a polarized America with slavery, states rights, and the plantation aristocracy on one side and abolitionists, unionists, and tariffs on the other, just to name a few of the contributing factors and not forgetting the movement toward women’s rights and the rights of factory workers. Of course, slavery was the dominant issue and was the underlying driving force for many of the other putative issues.

And we must also not forget that the Civil War followed on the heels of the recession or panic of 1857, the Dred Scott decision of 1857 from the Supreme Court, and what many would describe as the dysfunctional Congress of the 1850s where Congressman Preston Brooks of South Carolina nearly clubbed Senator Charles Sumner of Massachusetts to death in 1856 with his cane for taking offense at something he said. Does all this sound vaguely familiar?

In the second decade of the Twenty-first century, many would argue that we have abortion as the polarizing issue with a seasoning of gay rights to complicate the story. It’s the left versus the right or the liberal versus the conservative, depending on your perspective. And we’ve just experienced a major recession in the midst of a totally dysfunctional Congress – not to mention that we have our first black president. No one has been caned yet, but we’ve certainly been “hermanated” and we’re currently enduring the aftereffects of the decision of the Supreme Court in Citizens United on our electoral process.

Have we as a country learned nothing? Are we doomed to repeat history? Are we headed for another catharsis equivalent to the Civil war?

As we celebrate Memorial Day this weekend, I encourage everyone to remember that its original purpose was to honor Union soldiers who died in the Civil War, although Southerners quickly extended it to their own dead. And let us also remember the lessons learned from that tumultuous period as we deal with polarization in our own day and time.

While sadly it has become politically incorrect these days to speak of Confederate soldiers, ancestor or not, I salute my great-great grandfather for his courage as a soldier and honor him on this Memorial Day. But I also repudiate the abomination of slavery and racism that were at the core of the Southern “lost cause.” We only diminish ourselves when we seek to withhold equal rights under law from others or seek to belittle or “cane” those who would disagree with us, or hold a different worldview, or haven’t fared as well as other citizens of our great country. That is the ultimate lesson to be remembered on this Memorial Day.

Shown in the picture is Private Charles Washington Stoner of Company D of the Twenty-third Regiment of NC Infantry, another great-great grandfather, who survived the massacre of Iverson’s Brigade. My step great-great grandfather and second husband of Camilla Stoner Morgan, First Sergeant Daniel Cress Basinger, was wounded in the stomach at Forney’s field, but survived to fight until his capture at the Battle of Spotsylvania Court House. Nathan Morgan, great grandson of the Revolutionary War soldier, was seriously wounded in the hip on Forney’s field, but survived to fight another day and surrender with General Robert E. Lee at Appomattox Court House.
Posted by Keith McDowell at 8:18 AM