The Misadventures of the Mad Scientist 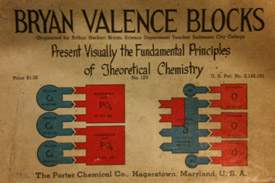 It was a different time, a different age. It was the 1950s and the birth of rock and roll, “ducktail” haircuts, rebels without a cause, beatniks, mutually assured destruction, fallout shelters, ICBMs, Eisenhower, “Atoms for Peace,” the International Geophysical Year, the launch of Sputnik, and most important of all, the introduction of the beach bikini as immortalized by the song: Itsy bitsy teenie weenie yellow polka dot bikini. It was a time of great change and the explosion of the American middle-class culture, steeped in images of cowboy swagger and puerile rebellion, but immersed in a protestant work-ethic and helmed in by religious dogma.

Even better from my perspective, young children received for Christmas their Chemcraft chemistry set made by the Porter Chemical Co. in Hagerstown, Maryland, and began their personal journey into the world of science through chemistry. I still possess the manual “Chemcraft Magic” that gives detailed descriptions on how to conduct a magic show while turning water into wine. And one of my prized possessions is the Bryan Valence Blocks box with all its contents that helped me learn about valency long before my high school chemistry course. What can I say? Some of us are easily entertained.

In addition to my chemistry set, I quickly discovered that local drugstores would sell me large bottles of potassium nitrate (Saltpeter), sulfur, and powdered charcoal having no idea that these are the primary ingredients for gunpowder. It was the heyday of unfettered exploration and the mad young scientist.

And as might be expected, my basement laboratory soon became a scene for many adventures and misadventures as the neighborhood boys, my brother, and I worked hard to create the perfect solid fuel for our homemade rockets, many of which blew up, causing consternation and worries about setting the local field on fire. Somehow, we could never get the right tubing to encase the fuel and our rockets were hopelessly unbalanced aerodynamically - not to mention the time we spent days filing on an aluminum rod to get aluminum powder, only to have a friend ignite it, singe his eyebrows, and nearly blind himself from the flash. We laughed for days about that adventure and the image of him running from the basement.

Of course, producing high quality ethanol from blackberry mash was trivial when one has a nice glass condenser to build a distillation apparatus. I'll never forget the long hike back and forth to the blackberry briar patch on the far side of what is now business 85 in High Point, North Carolina, and the tortuous exercise of extracting the wild berries from the briars without getting too badly scratched. And then there was the endless debate about how to make the mash. We were the children of Erskine Caldwell's Tobacco Road (movie - book) fully versed in the use of moonshine whiskey doped with honey to “clear the pipes” and cure coughs and congestion. But must we add a dead mouse to the mash? The Encyclopedia Britannica was our only source of information which, of course, none of our gang possessed.

I’ve always wondered what the neighborhood thought about our intrepid gang of explorers, especially during that summer when we made a number of “dry ice” bombs. The trick was to put dry ice – not easy to find or purchase – into a canning jar, add water, and close the lid. After a bit, the pressure from the carbon dioxide gas would make the jar into a lethal bomb, ready to blow. We drew straws to see who got to fire the BB gun at the jar from a distance. When hit, the jar would explode with a very loud bang, sending glass shards all over the place.

Such foolish misadventures are now enshrined by the annual Darwin Award for stupidity.
My own contributions to winning the award - not including exploding rockets, dry-ice bombs, and the time I stunk up the house with the smell of rotten eggs during a visit from my father's boss - started as a teenager when I was curious about flash bulbs for cameras and how they worked. Why let’s just hold the bulb and attach it to a battery and see what happens! I’m lucky my fingers did not become permanently attached to the bulb as it flashed, although the burns and the pain were felt for some time.

Not learning my lesson about electricity, I fondly recall an evening in my dorm room with my roommate sitting across from me with his feet propped up on the desk and leaning back in his chair. I was happily engaged in trying to make a home-built radio work and decided I needed to stick the screwdriver into the inner workings without turning off or unplugging the radio. Ah, I will never forget the look of horror on my roommate’s face as the sparks flew and he tumbled over backwards while a major section of the dormitory went dark. I’m sure Wake Forest University to this day is still trying to explain the 1963 blackout of the dorm. And people wonder why I became a theoretical chemist!

Notwithstanding my own peccadilloes and youthful misadventures or those of my many friends and colleagues who grew up in the same era and have their own stories to tell, whatever happened to youthful experimentation and the real discovery process? By contrast with my era, today's children buy their rockets as a kit, join a local rocket club, and launch under very controlled conditions. Modern chemistry sets for children advertise safety as their principal goal. And good luck on buying any chemicals from the local pharmacy! Somehow, it doesn't seem the same. Children seem to know that it is somehow rigged to work and is no longer play. It's too antiseptic! Where is the adventure or the exploration? Gads, in today's world, my teenage misadventures would land me in jail!

And what about our next crop of scientists, engineers, mathematicians, inventors, and innovators? Is the entrepreneurial spirit produced by global competition enough to motivate or produce such people from the unwashed masses? And do we really want "tiger moms” turning children into programmed automatons whose lives are driven by a ruthless schedule or the need to win the local science fair? Or is social networking the newest trick? Wow! Maybe it’s time to once again dust off Crosby, Stills, Nash, and Young and replay their message to teach your children well.

No one from my generation would suggest that parents put their children at significant risk of winning the Darwin award or that society return to the 1950s. Instead, we need to draw from the lessons learned during that era and the banner crop of creative minds that emerged to produce a new era of experimentation and discovery by our children unfettered by rigid parental control and societal dogma. We must find a way to strike the proper balance that such creative minds require. Hmmm, I wonder what happens if I push this button on my laptop … .

For those who walk to a different drum beat, check out the book by Theodore Gray: Theo Gray’s Mad Science: Experiments You Can Do at Home – But Probably Shouldn’t, Black Dog & Levanthal, New York, 2009.
Posted by Keith McDowell at 1:08 PM