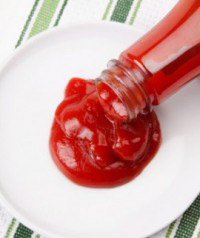 Let’s see, should I go straight to the knife and dig away in the bottle like some country bumpkin, or should I turn the bottle over on its lid on the table and await the inevitable effect of gravity? I could display a Type A personality by pounding on the heel of the bottle, or better, a Type B by tilting and gently tapping on the neck while engaging my dinner partner in scintillating conversation, sure to last for several minutes. But then who has ketchup with French cuisine? Julia Child would be appalled.

Fortunately, such acts of feigned sophistication designed to cloak abject frustration may soon become a thing of the past; that is, if we believe the engineers at MIT. Of course, seeing is believing and like most of you over the Memorial Day weekend, I chowed down on my ketchup-coated hot dog and watched with fascination the endlessly repeated video-clip of ketchup sliding effortlessly from the ketchup bottle. Dear God, I thought. It’s the end of an era as I munched away and hummed Paul Simon’s tune Slip Slidin’ Away.

It’s called LiquiGlide. Designed by Dave Smith, an engineer in the MIT laboratory of the
Kripa Varanasi Research Group, LiquiGlide is a revolutionary, super-slippery coating likely to become a disruptive technology and innovation. And even better, it’s FDA approved. Let’s hope it doesn’t slide away into oblivion like the Facebook IPO.

LiquiGlide is by no means the first non-stick coating to be invented. Do you remember Teflon? Teflon was discovered accidentally in 1938 by Roy Plunkett while working at Kinetic Chemicals. Subsequently in 1954, the French engineer Marc Grégoire used Teflon to create a non-stick pan that entered the US market in 1961 as “The Happy Pan” – never “happy” for those husbands who stupidly used a metallic spatula while burning their fried eggs when their wife was away. And have you noticed that we are back to the French and food?

Of course, in the Twenty-first century we’ve moved past simple Teflon-coated pans into the age of stoneware and Orgreenic pans. If the television and Internet commercials are to be believed, you don’t even need to spray them with PAM! Shucks! I like my daily dose of synthetic grease, reputed to be olive oil. What better way to tantalize my taste buds while clogging my arteries.

And for the mountaineers and extreme sports enthusiasts among us, who can forget the flowdown technology from Teflon known as Gore-Tex. Even better, the concept of “non-stick” or low-friction material has entered the world of competitive swimming. Led in many ways by Lance Armstrong and his desire to achieve every ounce of competitive advantage from both low technology – shaving the hair off his body - and high technology – cycling in a wind tunnel, the effects of friction on swimmers has led the swimsuit maker Speedo to invent flex skin and FASTSKIN3 based on the nano-level structure of shark or fish skins. Sadly, the jock-strap version of a Speedo swimsuit really should be outlawed for wear by some men. Where are the sharks when you need them? And, as always, rock and roll lyrics were there first as The Cadillacs crooned:

Well now, they often call me Speedo
‘Cause I don’t believe in wastin’ time.

And for the less fortunate husbands among us whose wives have bionic hearing, able to hear every squeaky wheel and door hinge within a radius of one mile, we have WD-40, yet another innovative product that ranks right there with squeeze-tube graphite.

Humor aside, friction and wear is a major and costly issue for our modern society, whether to get the ketchup out of the bottle, reduce the wear and tear on all forms of machinery, or permit gas-guzzling automobiles to use less fuel as they push through the air and roll on the pavement. It has been reported that “The annual cost of friction and wear-related energy and material losses is estimated to be over $700 billion - - 5% to 7% of the United States’ $14 trillion gross national product.” Banning friction and wear would be a great GOP issue for the coming election … if only Mother Nature would cooperate!

Even the business world has taken note of “Saving Energy by Fighting Friction”. Of course, they were mostly concerned with “cheeks burning for a piddling payoff” after sucking on a straw to drink one’s favorite milkshake. Hmm, wait a minute! What happens if we marry LiquiGlide to straws? Folks, you heard this idea here first from me, but don’t blame the messenger for the ease with which you consume those extra – but tasty – calories.

Yikes! Now I’m hungry. It’s time to finish off those hot dog buns for lunch before they grow stale. Darn, I’ll have to get that !&%#@ ketchup out of the bottle!
Posted by Keith McDowell at 11:55 AM