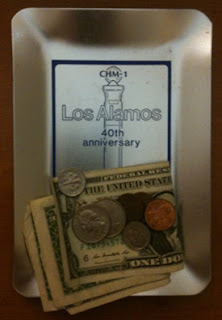 You know it’s a slow news day when credit default swaps, leveraging, and the loss of $2 billion by JP Morgan are replaced by the headline: “delayed-choice entanglement swapping (DCES) will determine our past based on our future.” No, DCES is not the latest gimmick on Wall Street to take our money and destroy wealth or a new fad to confuse the already complicated dating-marriage rituals, the prominent issue of gay marriage notwithstanding. DCES is a new phenomenon discovered by physicists as part of the older story of quantum mechanical measurement theory.

The simplified storyline goes something like this: Party Boy sends out invitations to a party to three unconnected people: Alice, Bob, and Victor. Alice and Bob open their invitations at the same time and decide whether or not to go to the party independent of each other. Victor the procrastinator waits until the final moment before picking up the envelope. Will he open it or not and, if so, what will be his decision about going to the party or not? Believe it or not – I hope you are following all these “knotty” choices, in the quantum mechanical world of entangled photons, his delayed choices affect the earlier decisions of Alice and Bob and exactly who shows up at the party … or not. In other words, future events influence the past and affect one’s perception of what is reality. Or as George Strait famously warbled: “The who I was before I was your used to be.”

Confused? You should be! It’s rather like being given the homework assignment in your high school English class to diagram or parse the following Rick Perry quote:

Flip flopping aside, waitors – garçons for the rich effete among us – have long understood the DCES phenomena. It has to do with “reading” the patron at first glance and entangling one’s level of service and customer satisfaction in anticipation of the size of the gratuity. And just like quantum mechanics, it’s a game of probabilities played by some with exquisite skill. Yikes! Is DCES really just another manifestation of the self-fulfilling prophecy?

And, of course, psychologists have also entered the fray. Leonard Mlodinow in his new book, Subliminal: How Your Unconscious Mind Rules Your Behavior would have us believe that if we change our perception, we change our reality. It’s amusing to see psychology and physics coming together in common cause, but then Mlodinow is a theoretical physicist by profession. Nonetheless, the concept of “perception becomes reality” is yet another slippery conundrum made whole by modern research. But then one must not discount the U.S. Army jumping the gun with their former slogan: “Be all you can be.”
And what does any of this have to do with innovation or commercializing university research? Who knows, but it’s safe to say that our unconscious mind, entangled or not, will not produce the next Facebook – is it’s stock really worth the IPO-expected asking price or is that just a figment of my imagination soon to become reality?

So what conclusion should we draw from the world of DCES and entangled minds and  the effect of delayed choices on our reality? I say, tip the innovators! They will make the future become what it was before it used to be.
Posted by Keith McDowell at 11:03 AM